Skip to content
TGIF everyone. Today blog tour is Infamous by Allison Stowe. This one is a YA thriller.

I got to ask Allison a couple of questions. I enjoyed this interview.

There is also a giveaway. 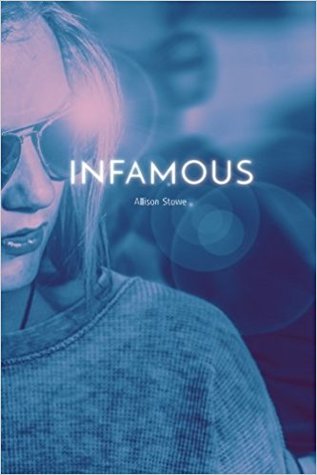 Enter the world of this YA thriller, where nothing is ever quite as it seems…

It’s been five years since the high profile kidnapping case which turned Cassie Waterson’s life upside down. The aftermath led her to become a household name – for months, she was splashed across TV screens, appeared in newspaper headlines, and featured in the furtive whispers of the residents of her hometown. But why? She hadn’t done anything significant. In fact, she’d done nothing at all; merely watched, motionless, as a shadowy figure lifted her baby sister off her feet, and bundled her into the back of a station wagon.

That single moment soon became Cassie Waterson’s life. Agonised by guilt, confused by the lack of punishment, scrutinised by the media circus… everyone claims to know Cassie now, but nobody does at all. The face she puts on for cameras, the voice she fakes for the talk shows… none of that is the reality behind the mask. Cassie is not the strong, confident girl who glares with certainty from the screen. Cassie doesn’t have her assuredness, or her optimism about her sister coming home. Cassie is someone else entirely, and the only person who knows is the one person she must avoid… at all costs.

Every story has two sides, and the flipside of Cassie Waterson is Alexis Aldridge. Unknown, anonymous, kept hidden from the world by her fearful parents… Alexis is a conundrum, wrapped in darkness. While her and Cassie lead opposite lives, they both long for the one thing they miss: a sense of normalcy, and the freedom to be themselves.

Infamous is an unmissable YA mystery novel which will take you on twist after turn, and which provides suspense and surprises on every page.

S: Hi Allison, thanks for taking the time to answer my questions.

A: Thanks for having me on your blog!

S: When writing Infamous what kind of research did you conduct and how long was your research process?

A: There were two main areas that I researched before I started writing. Firstly, I researched Young Adult books that featured a kidnapping, because I wanted to see what was already out there. It’s a popular topic, and I needed to know that my angle hadn’t already been written. At the time, I had a vision of a book about a teenage celebrity whose claim to fame was her sister’s abduction. I knew that it would be character-driven, following a girl whose life had been destroyed by this super traumatic event, and yet simultaneously, to the public, she was defined by it. I also did some research on some of the most famous kidnapping cases, like Jaycee Dugard and Madeleine McCann. It wasn’t hard, because I had already been swept away by these cases, like most of the world! But it was really important to me that Infamous didn’t have the hallmarks of any famous cases. I didn’t spend too long researching — maybe two weeks — because I have a tendency to over-think and over-plan, and then avoid the actual writing part. For Infamous, I tried out this ‘stop thinking, start writing’ approach.

Without giving too much away, there were parts of Infamous that required research on things like laws, statistics, and incredibly random facts. It could literally be a throw-away line from a character, but I had just finished a degree in journalism, so it felt really uncomfortable to toss in a fact that may not be true!

S: How did you select the characters name for your book?

A: The characters are so important to me. When I created them, naming them was the last step. First, I created character profiles with their personality traits, age, appearance, mannerisms, fears, and a few of their favourite things (colour, food, movie). I considered how they present themselves to the outside world, and who they are internally, which may be quite similar or drastically different. I thought about their childhoods, and wrote down any key events. Once I had the characters, the names mainly chose themselves. For a couple of them, I went online to look at baby names from the time that they were born, and scanned until something clicked, but that was really a last resort!

S: What did you edit out of Infamous?

A: A subplot of Infamous is about Cassie’s struggle with her sexuality, and her feelings for her on-again-off-again friend, Kendall. I kept quite a bit of the subplot, but at first, I’d included a storyline where she dated a male character. For much of the book, Cassie tries to make her life as simple as possible, because its already so incredibly complicated. It’s like, if anything else were to go wrong, everything would crumble, so she needs to be perfect. It made sense to me that she would try to make her attraction to Kendall ‘go away’ by dating a boy. In the end, the manuscript was too long, and the storyline didn’t feel necessary to the character. I also edited out quite a bit of Cassie’s internal dialogue, where I felt like it was more for my own sake, so that I knew what she was thinking, rather than driving the story forward. Similarly, there were a couple of conversations with Sara (Cassie’s best friend) that I edited out, because they didn’t take the story forward.

S: Vicky you stated that you wrote you first novel at 13 but Infamous is your first published novel. How many unpublished or half-published novels have you written?

So sorry I meant Allison 😂😂

A: Hah! Vicky is being very generous with my book-ography! Actually, I did write a novel when I was 13 years old. At the time, I was in the fan fiction phase of my life. A friend told me that this publishing company had launched a writing competition; allegedly, it was a competition for a new fiction series based on our favourite show, and she suggested that we co-author a book together. We had a system where we would write every other chapter, passing it back and forth. Full disclosure: I’m not entirely convinced that there was a book writing competition. It could have been a figment of my friend’s imagination! However, I’m told that the publishing company responded to our submission and said that they couldn’t print it because it involved quotes from the show (which were a key part of the plot). I used to joke about that book, but I’m actually pretty impressed with myself, looking back on it now. Since then, I’ve started (and never finished) at least 3 other books that I can think of. It’s really hard to keep up the momentum, and juggle writing with the rest of life. It actually wasn’t a bad book, if only it hadn’t been based on a franchise that already existed!

S: What is the most difficult part of your process when writing Infamous?

A: The most difficult part was continuing to write, in the absence of ‘motivation’ or ‘inspiration.’ I think probably a lot of writers will say the same thing. If you’re going to write a novel, you can’t wait around for inspiration. I forced myself to write when I was exhausted, or distracted, or unhappy or anxious. I wrote on breaks at work, and in a tiny apartment without much sunlight. To some extent, sometimes I would skip chapters and write a scene that reflected my mood, which could help. But in general, writing wasn’t a hobby anymore. It became a job. I still enjoyed it, but it felt like there was something at stake if I didn’t make progress. I think I only got through it because I felt like I owed it to my characters to see their stories through!

S: How many hours a day did you spending writing Infamous?

A: It varied quite a bit. I gave myself a word limit to reach each day (500 words). Some days, I’d write 500 words during my lunch break at work. Other days, I’d be sitting up in bed at midnight, staring at the blinking curser and getting increasingly frustrated with my 500-world rule. On average, I probably wrote for 2-3 hours per day. 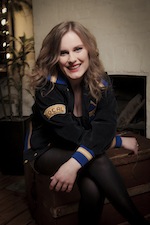 Allison Stowe is the author of the YA novel, ‘Infamous.’ Raised in a generic Toronto suburb, Allison spent her childhood posting fan fiction online in hopes of influencing The WB’s writing rooms. She wrote her first novel at age 13. It was based on her favorite TV show, and upon submission she learned of copyright law.

In 2010, she graduated with a BA (Hons) in Journalism from Ryerson University, where she was the Managing Editor of the online newspaper. During her brief journalistic career, Allison wrote for Chatelaine magazine and TV Guide Canada (essentially achieving a life dream). Shortly after graduation, she relocated to Brighton, UK, and refocused her attention on her second passion – helping young people.

While studying for her MSc in Educational Psychology at UCL, Allison wrote Infamous as a way to fulfil her instinct to keep writing. When she isn’t writing about the lives of young adults, or watching prime time teen dramas, Allison mentors university students who’ve been diagnosed with mental health issues. She lives in London, UK, with her fluffy ginger cat, Sawyer. ‘Infamous’ is her debut novel.