The Brutal Time (Angelbound Origins 6) by Christina Bauer is LIVE!!!

I am so excited Christina took some time to give us insight on Why Setting Is Important to Your Story (GUEST POST).

Don’t  forget to enter the giveaway. You could win Tons of Swag!!! I am going to enter this one myself.  GOOD LUCK!!! 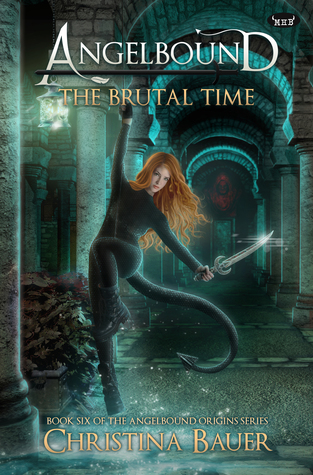 “I love the Angelbound Origins world and just can’t seem to get enough of it!” – The Avid Reader

As the Great Scala, Myla Lewis is the only being who can move Purgatory’s souls to Heaven or Hell. It’s a big job. Too bad Myla goes through assistants faster than a hot knife through brownies. Not that it bothers her much; Myla’s always been a solo fighter.

Then comes the problem of the fading angels. Millions of Heavenly residents are dying. According to a prophecy, the only way Myla can save them is by traveling back in time, meeting King Arthur, and creating her own knights of the round table. The catch? Doing so might end the after-realms in a bloody demonpocalypse.

Myla and her main squeeze, Lincoln, aren’t afraid of taking a few chances (in between kisses). But with so much at risk, the stakes may be too high, even for them. And the biggest challenge of all? Finding those knights.

Because Myla Lewis doesn’t play well with others. At all.

“These books don’t just capture your attention, they straight up demand it. Christina Bauer has created a fascinating and unique world that you do not want to miss out on.” – Bookhalolic Brittany

Why Setting Is Important To Your Story

As part of launching my new book, BRUTAL TIME, the lovely folks at Books Books & More asked me to discuss the idea of setting in terms of story. Since I write fantasy, setting is something I play around with a TON. To show what I mean, I’ll start with one of the classic lines from Western humor:

A guy walks into a bar

These six small words tell a sizable story based on a world that’s already built. For example:

Now, let’s do the same phrase in fantasy.

What the WHAT? What’s a scalebub? Why does it slough? Is ‘it’ really a he or she? What the hell is a faecenter?

See what I’m talking about? Pain in the ass.

In this case, let’s say that a scalebub this is a snake fairy who’s losing his skin (hence the sloughing) and is in his equivalent of a bar (that would be the faecenter). Now, we come to the classic debate of ‘show versus tell.’ This is a writer’s game. As a creative diva, I don’t want to just say that he’s a snake fairy, I’d rather show it. Maybe I have him look in a mirror and assess his appearance. After that, he could try to move and lose some of his skin…It’s that time of the year! Finally, the bartender at the faecenter is gives him the evil eye for leaving his skin on the floor.

By this point, I’ve spent about a page and a half inside the fairy’s head without any real action or dialog. Not good.

Thus comes the fantasy writer diva’s dilemma. Do I stick with the page and a half … or do I just do some asides that get the same thing done fast, like: ‘It’s so unfair. Snake fairies like me are never welcome in faecenters when we’re sloughing off our skin. Doesn’t matter that we need a drink, same as every other creature in Fairy Land.’

Wow! Three sentences and BOOM! I’m done. Now that setting is fixed, I can get into the action and character development. See where I’m going with this? It’s always a tough judgment call on ‘show versus tell’ when it comes to intense settings in fantasy. It depends on the scene, the pace of the story, and a bunch of other things, not the least of which is ‘I dunno. That just works for me.’

At this point, I always ask myself: Self, why do all the extra work to build out an intricate setting in a new fantasy world? It’s a crap ton of extra hassle. Plus, once it’s done, there’s still all the other work of creating a good story. In other words, what does the man do in the bar, or the scalebub in the faecenter?

After much contemplation, I have decided that only a nut job would have the patience for all of this fantasy scene-setting stuff…And I am one such nut job. Viva la fantasy!

Christina Bauer thinks that fantasy books are like bacon: they just make life better. All of which is why she writes romance novels that feature demons, dragons, wizards, witches, elves, elementals, and a bunch of random stuff that she brainstorms while riding the Boston T. Oh, and she includes lots of humor and kick-ass chicks, too.

Christina graduated from Syracuse University’s Newhouse School with BA’s in English along with Television, Radio, and Film Production. She lives in Newton, MA with her husband, son, and semi-insane golden retriever, Ruby.

Be the first to know about new releases from Christina by signing up for her newsletter: http://tinyurl.com/CBupdates